She’s had a gun held to her head. She’s been robbed and threatened with death. Through it all, the Geneva Conventions and some luck have seen her through to the other side relatively unscathed. The guest speaker at this month’s Club Northland luncheon (Friday 26th June) is Felicity Gapes.

Club Northland is part of Alzheimers Society Northland Inc. which is a not-for-profit charitable organisation providing information, support and education to people with dementia and their caregivers and families/whanau throughout Northland.

We walk beside all people affected by dementia

Their services include home visits, support groups, carer education seminars, resources and an eight-day dementia care service. As well as individual support, they offer support group sessions and carer education programmes to people who are dealing with issues of dementia.

Alzheimers Society Northland regularly host fundraising luncheons (purchase your ticket here) with a delicious lunch, business card draw, raffles and most excitingly, a talk by a fascinating speaker. The guest speaker at this month’s Club Northland luncheon is Felicity Gapes.

Awarded the Florence Nightingale medal this year, Felicity has tended to the wounded and the innocent in places where arrest, torture and murder are commonplace. As proud patrons of Alzheimers Society Northland, the goodGround team will be attending the luncheon to find out more about this incredible woman.

Gapes followed her mother into nursing and looking after people came naturally to her. She trained in Whangarei and spent time in Hawkes Bay and the UK before joining a practice in Kingsland, Auckland.

“The patients were from lower socio-economic backgrounds or migrants. This is where I really learned how to nurse. I saw how poverty, overcrowding and social issues could really impact on health.”

At 29 she joined the New Zealand Army and, within the year, she was serving in Bosnia, towards the end of the conflict in 1995. She worked as a weapon-carrying regimental nursing officer, providing medical assistance to her team and other soldiers. They ran clinics from the back of an ambulance for civilians who were running for their lives amid the chaos of the ethnically rooted war.

Felicity’s next deployment was in 1998 to Papua New Guinea, after a devastating tsunami that took the lives of over 3000 people.

“No family was left untouched. None. We did a massive air emergency evacuation and about half of the patients had fractured femurs. It was like someone had lined them up and whacked them with a coconut tree, such was the force of the tsunami. It’s an incredibly painful break, but none of them wanted pain relief. They were more terrified of the flight because none of them had been on a plane before.”

In 2000 Felicity Gapes, as a senior nurse, ran a field surgical team in East Timor before applying for a role with the Red Cross. Her first mission after taking on this role was as a first aid delegate for the Pacific Islands, based in Fiji. She went on to deployments in Somalia, South Sudan, Darfur and Myanmar. 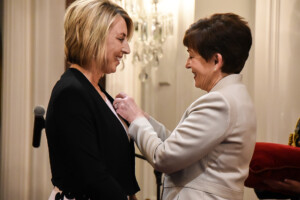 During a mass meningitis vaccination campaign in Darfur, she had to dig deep into her own training when she and her colleagues feared an attack by locals who were suspicious of the vaccination programme.

“I wanted to run away but we just talked and engaged and the campaign went ahead with 75,000 vaccinations over two months.”

Gapes has been arrested several times since she signed up with the Red Cross Red Crescent movement in 2004 after a decade of peacekeeping missions with the Royal New Zealand Nursing Corps.

To meet this incredible woman and find out more about her fascinating life, book your place at the Club Northland Luncheon. We would love to see you there.

Want to Save Money? Mike Whittaker Mortgages can save you money on your mortgages. We get tough...

Dub Dub Has Been Found!